Originally the game was shipped to players as a full product. They were re-downloading up to 5 GB each time a new version was up, but as the audience grew bigger, this solution no longer scaled well.

Velocidrone got complaints from clients about how much data they had to download. The Google Drive hosting wasn’t reliable either and lots of downloads hung and wouldn’t restart, which made even more people complain.

The studio needed a more efficient, and reliable solution for distributing the simulator and they started looking for one.

The best way to distribute a cross-platform racing simulator

Their first pick was the Mac App Store. Because Velocidrone runs cross-platform (Windows, Mac, Linux), Apple strictly prohibited patching it through the store. Besides that, it wouldn’t allow signing games that use patching, and these were immediate deal-breakers for the studio.

The second attempt was with Steam, but it doesn’t provide good cross-platform support either. On top of that, Steam doesn’t provide a proper audience for racing simulators, as they are not “gamers” per se. Additionally, Steam costs reflect the access to that gamer audience which they did not benefit from with the Velocidrone target market.

Eventually, Bat Cave Games started looking for independent distribution. They came across a couple of different patchers, which kept causing installation problems and the crew didn’t find them reliable enough.

When customers buy a product, they have a short span of attention before they’ll ask for a refund. If something doesn’t work quickly, they ask for their money. We were also a team of just three developers and install problems from customers made us run out of support staff really quickly.

Been there, drone that

Eventually, Ashley, the founder of Bat Cave Games and Velocidrone, stumbled across PatchKit. We’ve kept a close relationship since 2017 and during these 3 years, we: 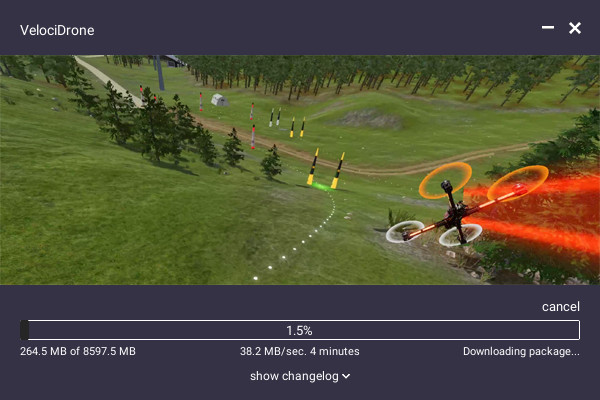 PatchKit reduced the number of installation problems and today the studio rarely loses a client because of distribution issues. It kept these problems at a relatively low level even during the peak caused by the worldwide lockdown.

Our standalone launcher gave Bat Cave Games more space to focus on the strategy and the development of Velocidrone, instead of spending time on resolving client problems.

It was and still is a pleasure working with Bat Cave Game’s crew. They definitely did push us to deliver a better product, and for this, we will be forever grateful. Thank you, Ashley!

PatchKit is a hands-off solution that prevents us from dealing with install issues and allows us to focus on the product. Now we rarely lose a sale because the customer can’t install the game.